One of the main activities of the Support. Don’t Punish campaign is a Global Day of Action taking place on 26th June each year.

26th June is the United Nations’ International Day Against Drug Abuse and Illicit Trafficking – a day that on which many governments celebrate their contributions to the global ‘war on drugs’. In the past, some governments have even commemorated this day by holding public executions or beatings of drug offenders. 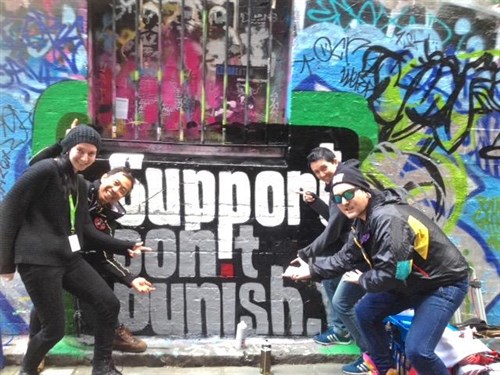 26th June is also the United Nations’ International Day in Support of Victims of Torture – an ironic coincidence given the widespread torture and abuse suffered in the name of the war on drugs.

2016 is a big year for drug policy – with the UN General Assembly Special Session (UNGASS) on drugs in April and the UN High Level Meeting on HIV/AIDS in early June. But once these meetings come to an end, the Global Day of Action – on or around the 26th June – is an ideal opportunity to highlight the outcomes and promote policy reform and harm reduction at the local level.

The aim for the Global Day of Action is to produce high-profile and visually symbolic local actions. It is your choice to decide what these actions are – and this decision depends on what is feasible and affordable, what works best in the local context, and what you think will have the greatest impact. The numbers involved can range from 10 or 20 people, to more than 100 people in some cities – and we hope that the examples from other cities can serve as inspiration as well. One of the greatest impacts that the campaign can have is through attracting positive media attention and raising awareness of the campaign issues. We recommend that local partners engage with the local media ahead of 26th June.

This allows us to tie together the local actions and to demonstrate that they are all part of a coordinated global effort. In many cities, you may also decide to use the Support. Don’t Punish logo alongside that of your organisation, your partners, and other campaigns.