Featuring Ethan Nadelmann as main speaker. Ethan was described by Rolling Stone as "the point man" for drug policy reform efforts. He is the founder and executive director of the Drug Policy Alliance, the leading organisation in the United States promoting alternatives to the war on drugs.

Ethan and his colleagues have played pivotal roles in most of the major drug policy reform ballot initiative campaigns in the United States on issues ranging from medical marijuana and marijuana legalisation to prison reform, drug treatment and reform of asset forfeiture laws. They also have reformed state and federal laws involving drug sentencing, access to sterile syringes to reduce HIV/AIDS, access to drug treatment, prevention of overdose fatalities, and all aspects of marijuana policy. 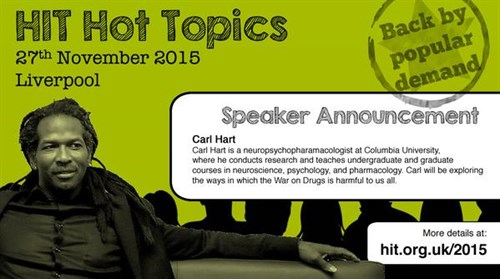 Carl Hart is a neuropsychopharamacologist at Columbia University,where he conducts research and teaches undergraduate and graduate courses in neuroscience, psychology, and pharmacology. Carl will be exploring the ways in which the War on Drugs is harmful to us all. You can also find Carl's talk from last year in the conference archive.

The misuse of death: This talk will consider how deaths are used, misused and ignored in drug policy discussions. Some deaths are considered highly noteworthy and lead to drastic policy changes. Others are ignored and steps to prevent them remain unimplemented. Why does this happen, what are the consequences, and what can be done about it?

The use of drugs to improve human performance, for example to improve physical performance in sports or cognitive performance at work may be increasing. Two opposing discourses can be heard, akin to those concerning the use of recreational drugs, a conservative one promoting zero-tolerance and repression, and a more liberal one promoting relaxation and individual autonomy. While public debate is on-going, harm reduction measures makes sense, for exemple by providing needle exchange for anabolic steroid use in body builders. Extension of such approaches merits reflection and debate.

Click here to read about additional speakers and conference information