2014: The year we finally learned how to talk seriously about dying

A new rule just approved in Massachusetts will reportedly make the state the first to require doctors to discuss with terminally ill patients how they wanted to be cared for at the end of their lives.

A new rule just approved in Massachusetts will reportedly make the state the first to require doctors to discuss with terminally ill patients how they wanted to be cared for at the end of their lives.

Though doctors already have been voluntarily holding these types of conversations with patients for years, most patients don't have an end-of-life care plan — and that could make the last few days or weeks of life needlessly painful, confusing and expensive for the patient and the patient's family. 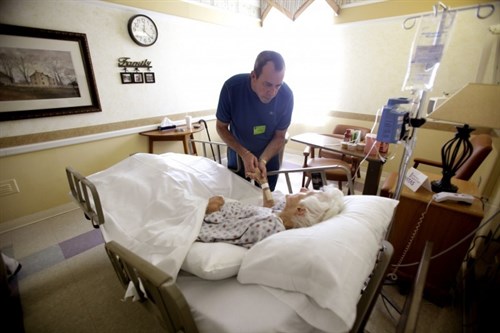 Here's how the new Massachusetts rule, implementing legislation from 2012, is described by WBUR:

A nurse or physician caring for the patient will then ask if they want to discuss care options. Do they want to be kept alive by any means possible, are they ready to stop treatment, or do they want to consider some options in between?

Providers can skip the requirement if talking about death conflicts with a patient’s religion or if the patient has said they aren’t interested. But there is widespread agreement in Massachusetts that more end-of-life planning is a good idea and that this requirement will help.

If 2014 should be remembered for anything in health policy, it's the year that marked a turning point in how we talk about dying. There was the Institute of Medicine report recommending an overhaul to end-of-life care, the story of the terminally ill 29-year-old Brittany Maynard choosing physician-assisted suicide,  Zeke Emanuel declaring he won't try to extend his life past 75, and Atul Gawande's book "Being Mortal."

You only have to think back to 2009 when the far right said a proposal to have Medicare pay doctors for holding end-of-life conversations amounted to "death panels."

That payment provision was stripped from health-reform legislation and immediately earned "third rail" status. That was until this year, though, when Medicare said last month it will consider adding the reimbursement policy for 2016.