Benjamin Phillips of the Harm Reduction Coalition made the following intervention on behalf of a global working group of harm reduction organisations, including Harm Reduction International, at the Civil Society Hearing for the UN High Level Meeting on HIV/AIDS in New York.

Harm reduction aims to reduce the health, social and economic harms associated with drug use, without requiring people to stop using drugs. When scaled up sufficiently harm reduction interventions, such as needle and syringe programs and opioid substitution therapy, have a significant impact on reducing new HIV infections, overdose, drug related deaths and rates of crime.

Last year, world leaders adopted the Sustainable Development Goals (SDGs), which included a target to end AIDS by 2030. Yet, if the implementation of harm reduction continues at its current levels only a minimal reduction in new HIV infections will be seen. 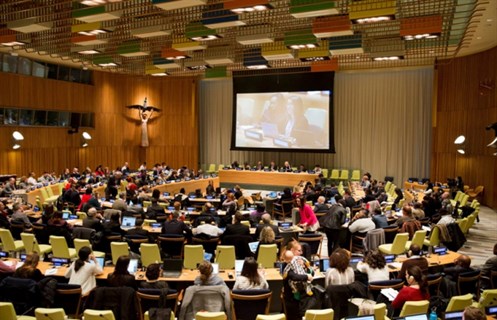 Prisoners have also been left behind in global responses to HIV. Between 33% and 50% of the world’s prison population is made up of people who use drugs, while global HIV prevalence is up to 50 times higher among prison populations than the community. Despite these alarming figures, key harm reduction services are severely lacking in prison and other closed settings. Behind this failure is the chronic underfunding of harm reduction. At last count, investment in harm reduction in low-and middle-income countries totaled $160 million, only 7% of the estimated $ 2.3 billion required. By contrast, $100 billion is spent annually on drug enforcement and control.

New projections by the Burnet Institute and Harm Reduction International show how just a tiny shift in funding could virtually end injecting-related HIV infections by 2030. By moving as little as 7.5% of current spending on drug enforcement into harm reduction programs, we could achieve a 94% reduction in new HIV infections among people who inject drugs by 2030, and reduce HIV-related deaths by similar proportions.