The US locks up more people, per capita, than any other nation. 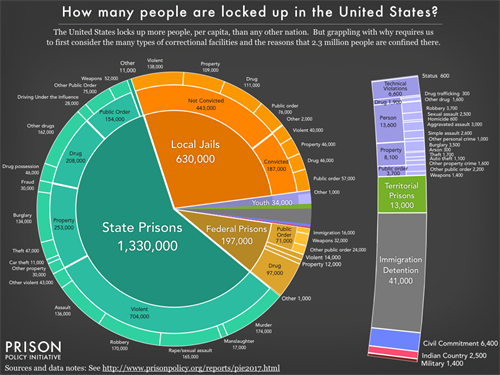 While this pie chart provides a comprehensive snapshot, the graphic does not capture the enormous churn in and out of US correctional facilities and the far larger universe of people whose lives are affected by the criminal justice system. Every year, 641,000 people walk out of prison gates, but people go to jail over 11 million times each year.

Jail churn is particularly high because most people in jails have not been convicted. Some have just been arrested and will make bail in the next few hours or days, and others are too poor to make bail and must remain behind bars until their trial. Only a small number (187,000 on any given day) have been convicted, generally serving misdemeanors sentences under a year.

RT @AvikChatterMD: My patients don’t do the “pain seeking behavior” thing that people talk about so when a patient of mine with bad opioid…

RT @INHepSU: We have joined forces with @INPUD @mdm_france and @HRInews to launch a global declaration to inform development of @WHO Global…

RT @INHepSU: At #INHSU2021 you'll have the chance to hear from experts in epidemiology and public health in #hepatitisC, other infectious d…

How did the COVID-19 pandemic affect people who inject drugs in UK https://t.co/6T2bkCey8c

Really enjoyed your talk & really looking forward to reading it but sadly release date in UK put back until end of… https://t.co/Gd3fu1AoKc

RT @INPUD: 📢There is still time to sign the declaration calling on the @WHO to support #decriminalization, #HarmReduction, community-led re…

RT @IDPCnet: On 'Intn'l Day of the World's Indigenous Peoples' (Monday, 9 August), join us for a panel showcasing experiences of resistance…

RT @AlexStevensKent: On 3rd September, I'll present a 'modest proposal' from me, @niamhrelease & @kirstie_release to decriminalise the poss…

RT @INPUD: Drug #decriminalization is called politically transformative by many, but few are listening to what people who use drugs have to…