British Columbia’s top public health officer is urging the province to decriminalize people who use and possess small amounts of illicit drugs in the province, calling it a “fundamental underpinning and necessary next step” in the response to the overdose crisis.

British Columbia’s top public health officer is urging the province to decriminalize people who use and possess small amounts of illicit drugs in the province, calling it a “fundamental underpinning and necessary next step” in the response to the overdose crisis. 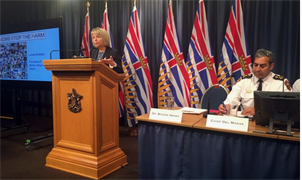 But B.C.’s Public Safety Minister is resisting the proposal, citing federal drug laws and a reluctance to direct the province’s police forces.

Bonnie Henry made her case for decriminalization on Wednesday, releasing a report that provided an overview of the history of Canada’s drug laws and strategies, the harms that prohibitionist policies have caused and a look at alternative approaches in other jurisdictions.

“The criminal justice system exposes non-violent, otherwise law-abiding people to a great deal of harms that they would not otherwise experience,” Dr. Henry wrote. “The societal stigma associated with drug use leads many to use drugs alone and hidden, increasing their risk of dying. B.C. cannot ‘treat’ its way out of this overdose crisis, or ‘arrest’ its way out either.”

Drug policy is a federal mandate, but provinces and municipalities can take steps to de facto decriminalize. Dr. Henry provided two options for B.C. in her report.

In the first, B.C. Minister of Public Safety and Solicitor-General Mike Farnworth could use powers under the provincial Police Act to prioritize harm-reduction approaches. A person caught with a small amount of illicit drugs could be linked to health and social services, and perhaps face an administrative penalty rather than a criminal charge and incarceration.

“The [minister] could then require that policing resources be aligned to this priority and that police services report to the minister on how they are implementing this policy,” Dr. Henry wrote.

In the second option, the Police Act could be amended to include a provision that prevents any member of a police force in B.C. from expending resources on the enforcement of simple possession offences.

These actions are permitted under the federal Constitution Act, which grants provincial legislatures exclusive authority to make laws in relation to the administration of justice, the report says.