Two former executives of a major US pharmaceutical company have been charged with conspiracy to distribute controlled substances in an unprecedented case.

The prosecution came as Donald Trump vowed to crack down on abuses by “Big Pharma" that have fuelled America’s opioid epidemic, which claims the lives of nearly 50,000 people a year.

It was the first time senior corporate executives have faced criminal charges in connection with distributing powerful prescription painkillers like oxycodone and fentanyl, which carry a high risk of addiction and overdose. 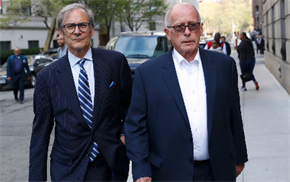 Laurence Doud, 75, chief executive of Rochester Drug Cooperative (RDC), pleaded not guilty in New York to charges of conspiracy to distribute controlled substances, and conspiracy to defraud the United States.