A poignant voice in the debate over what can be done to combat overdose deaths.

While reporting a recent article on the drug overdose crisis in San Francisco, I called Thomas Wolf, one of the loudest critics of the city’s policies, to run past him what I was hearing from professors and other experts who have spent their lives studying drug use.

“Forgive me for saying this,” Mr. Wolf politely told me, “but those people who you said you talked to — the experts — they have never shot dope, man. They never stuck a needle in their neck. They never spent a night on the street.” 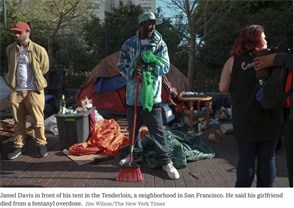 Mr. Wolf has done all of those things, which makes him one of the most poignant voices in the debate over what San Francisco should do to address an epidemic that claimed 713 lives last year, more than twice as many as died from the coronavirus in the city in 2020.

I took in Mr. Wolf’s main message: that the rampant availability of drugs in San Francisco, especially the fast-acting and very often deadly opioid fentanyl, makes it very difficult for users to successfully seek treatment and recover.

“What I’m pushing for is an urgency for the city to expand and promote drug treatment for people,” he said. “It’s not enough to just hand out clean needles. We need to take it a step further and get you off the street.”