This is the sixth in a blog series based on the findings of the 2015 annual European Drugs Report published by the European Monitoring Centre for Drugs and Drug Addiction. In it, the author explores new interventions to prevent drug overdose deaths.

It is estimated that over 70 000 lives were lost to drug overdoses in Europe in the first decade of the 21st Century. Although the annual figure of fatal drug overdoses started to fall between 2009 and 2013, the most recent data from a number of countries, including Germany, Sweden and the United Kingdom, show an increase.

The sad fact is that drug overdose accounts for more than 3.4% of all deaths among Europeans between the ages of 15 and 39. 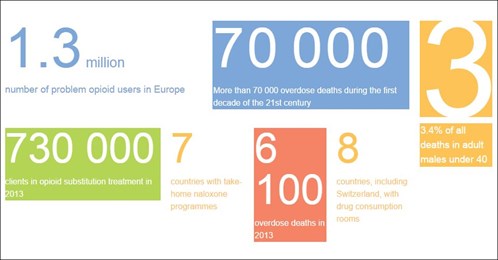 There are two main points of intervention:

There are three commonly used approaches to prevent overdoses in the first place:

(1) Raising the awareness of and providing information about overdose risks, (2) Provision of effective drug treatment and retention in treatment, and (3) Improving throughcare between prison and community.