In recent years, Dar es Salaam has seen an increase in illicit drug use, particularly heroin, as the large port city has become a pit stop for smugglers en route from Afghanistan to Europe and the rest of Africa.

In a discreet corner of the Mwananyamala District Hospital grounds, in the United Republic of Tanzania’s largest city Dar es Salaam, a group of young people queue outside a small window for their daily dose of methadone. Others are taking refuge from the intense heat in the few shady spots available in the dusty yard behind the low building housing the clinic.

In recent years, Dar es Salaam has seen an increase in illicit drug use, particularly heroin, as the large port city has become a pit stop for smugglers en route from Afghanistan to Europe and the rest of Africa. The heroin sold is poor quality but is cheaply available, with one dose costing as little as 1 US dollar. 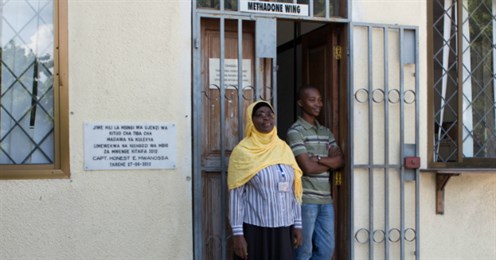 The most effective therapy for heroin users

Mwananyamala is 1 of 2 hospitals in Dar es Salaam that now make methadone available as treatment for addiction. Methadone maintenance treatment is regarded by WHO as the most effective therapy for heroin users, and methadone was added to WHO’s model essential medicines list in 2005. In combination with psychosocial support, it can help to reduce addiction to opioids such as heroin, prevent infection with HIV and other diseases transmitted by sharing needles, and reduce the criminal behaviour that often accompanies illicit drug use.