Southeast Asian authorities are not shy about doling out the death penalty to punish drug traffickers, and yet narcotics abuse has not abated. If anything, it is on the rise, which begs the question of whether the region’s war on drugs is working.

The latest report on global trends from the United Nations shows that while Colombia remains the world’s top source of cocaine, Asia is now emerging as a hub for both transportation and consumption of the drug. In 2016 cocaine seizures tripled across the continent in the span of just a year, the U.N. Office on Drugs and Crime said in its June report.

But methamphetamine is making even bigger leaps in Southeast Asia because it is not as geographically restricted as cocaine, which depends on cultivation of the coca plant. Officials in countries around the Mekong region seized 65 tons of methamphetamine in tablet and crystalline form in 2017, the UNODC said in a separate report -- that is nearly 600 percent more than the amount seized a decade earlier.

The apparent popularity of some drugs around the region stands in stark contrast to the “tough on crime” approach of many Southeast Asian governments, most of which have seen single ruling parties, military juntas, or authoritarian leaders consolidate power at the central level in recent decades. 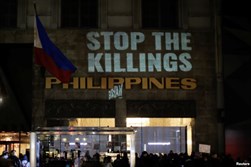 In the Philippines, President Rodrigo Duterte has earned notoriety for alleged extrajudicial killings of drug crime suspects. In Vietnam, capital punishment is meted out, often to drug traffickers, more often than anywhere else on the planet except in China and Iran, Amnesty International says. The human rights group also referred to Malaysia as one of the “staunch supporters of the use of the death penalty for drug-related offenses.”