Beneath the streets of Romania's capital, a living hell

Deep under the streets of Bucharest - in Europe, in the 21st century - there is a network of tunnels and sewers that is home to hundreds of men, women and children stricken by drug abuse HIV and TB.

When Ceausescu fell there were tens of thousands of children in orphanages and in state "care" in Romania. But in 1990 a series of reports revealed what a nightmarish misnomer that was. Scenes of neglect and cruelty reminiscent of the concentration camps.

So what happened to those children? 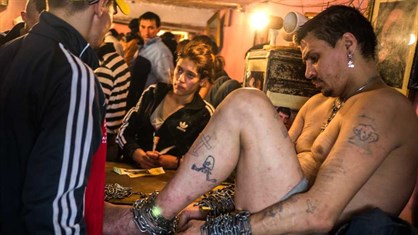 We've been told that some moved into the tunnels underneath Bucharest. Drug addiction is rife, some have had children of their own.

The entrance to this underworld is a hole in the pavement on a traffic island in front of the station. By late afternoon they start to wake up, clambering up out of the ground like the undead.

Among them is a little boy, Nicu, who looks about 12. We find out later that "little" Nicu is in fact 17 but his development has been stunted by the drug abuse. He agrees to send word down that we would like to meet the boss.

Read the rest of this remarkable story with footage here

Will the UN revamp its disastrous “Drug Free World” campaign in Brazil? https://t.co/LncqVqO8Hb

Newly introduced California Assembly Bill will sentence people arrested on drug charges to an alternative form of i… https://t.co/aHSmnSnpQ5

One activist is asking the Biden administration to remember the failures that led to the opioid epidemic as it choo… https://t.co/3boiqmHGnJ

Report on people dying of Coronavirus in prison in UK & lessons to be learnt : https://t.co/1s80RsJHMF

RT @russwebt: The impact of coronavirus on the numbers in prison and on probation https://t.co/y98lafLGi4

IDHDP is so fortunate to have Dr Hart as a board member. Finally a professional person with the courage to speak ho… https://t.co/yxGWIAisEq

Imprisonment for up to 15 years for using the word "drug" on the Internet - Drugreporter https://t.co/WVSFieAnT7

RT @Kassandra_Fred: Deborah Peterson Small told @DrugPolicyOrg in our 2014 Black History Month series - "The frame we need to be using for…

IDHDP - THE COST OF A CRISIS https://t.co/Edr7aqpxMD