No one knows how many South Africans are living with Hepatitis C, but the virus affects everyone from injecting drug users to suburban housewives.

For decades, treatment has been priced out of reach and largely unsuited for those living with HIV. Now, South Africa has received its first shipment of a new wave of cheaper, faster and better Hepatitis C medicine and has HIV activists to thank for it, write Laura Lopez Gonzalez and Kyla Herrmannsen for Health-e news.

One clean needle for every used needle handed in – that’s the deal as part of the Step Up Project’s weekly needle exchange project. As the building’s residents count their used needles into a medical waste bucket and receive new needles, a project nurse coaches them through how to inject safely. 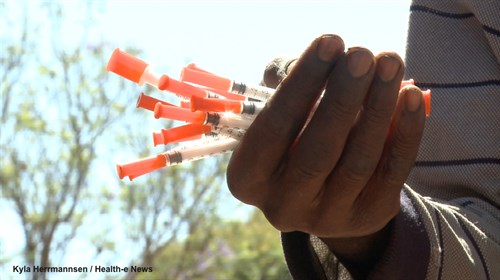 “People are going to use drugs,” says Step Up Project Tshwane Coordinator Nelson Medeiros. “It’s a reality – it’s not going away tomorrow. While it’s not going away, people need to have access to information and commodities to be safer.”

The Step Up Project is one of only a handful of organisations providing South Africa’s estimated 67,000 injecting drug users with clean needles. People who inject drugs are at a higher risk of HIV mostly because they may share needles. The HIV prevalence among this group in South Africa is about 19 % – almost twice the national average. They are also at a high risk of contracting Hepatitis C, a virus contracted via contact with infected blood. Hepatitis C attacks the liver and, if left untreated, can be deadly.

The World Health Organisation (WHO) estimates that up to 150 million worldwide have Hepatitis C, and about 500,000 will die from the virus each year. No one knows what the Hepatitis C prevalence is among South Africa’s injecting drug users or the country, in general, but a small 2013 Step Up Project survey found a higher prevalence of Hepatitis C than HIV among the group.