On this years world AIDS day, WHO emphasizes that expanding antiretroviral therapy to all people living with HIV is key to ending the AIDS epidemic in a generation.

On World AIDS Day WHO emphasizes that expanding antiretroviral therapy to all people living with HIV is key to ending the AIDS epidemic within a generation.

“The Millennium Development Goal of reversing the HIV epidemic was reached ahead of the 2015 deadline - an incredible achievement that testifies to the power of national action and international solidarity," declared WHO Director-General, Margaret Chan.

Expansion of antiretroviral therapy (ART) has resulted in a stark reduction of AIDS-related deaths. At the same time, increasingly effective prevention efforts have reduced numbers of new HIV infections. Since the epidemic’s peak in 2004, the number of - deaths has fallen by 42% with some 7.8 million lives being saved over the last 15 years, according to a new WHO report. The number of new infections has fallen by 35% since the turn of the century. 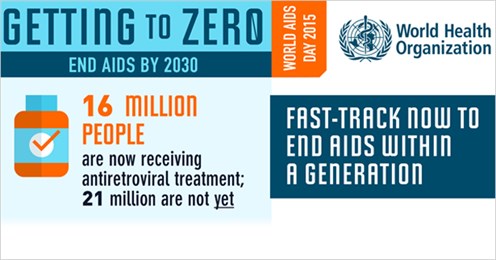 At the UN General Assembly in September, world leaders endorsed a new set of Sustainable Development Goals and milestones, including a call for ending the AIDS epidemic by 2030. Reducing the number of new infections by 75% and doubling the number of people on ART by 2020 are the first milestones towards achieving this goal.