‘Opiophobia’ Has Left Africa in Agony

Uganda has a strategy for giving scarce morphine to patients in pain. But many poor nations won’t emulate it, over fear of an opioid epidemic.

KAMPALA, Uganda — Pain is only the latest woe in John Bizimungu’s life.

Rwandan by birth, he has lived here as a refugee since his family was slaughtered in the 1994 genocide. A cobbler, Mr. Bizimungu used to walk the streets asking people if he could fix their shoes.

Now, at 75 and on crutches, he sits at home hoping customers will drop by. But at least the searing pain from the cancer that has twisted his right foot is under control. 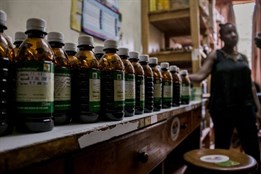 “Oh! Grateful? I am so, so, so, so grateful for the morphine!” he said, waving his hands and rocking back in his chair. “Without it, I would be dead.”

The cobbler’s desperate need exemplifies a problem that deeply worries palliative care experts: how they can help the 25 million people who die in agony each year in poor and middle-income countries without risking an American-style overdose epidemic abroad or triggering opposition from Western legislators and philanthropists for whom “opioid” has become a dirty word.