The harm reduction movement has made major gains nationally and around the world. But, according to a new report by Harm Reduction International, efforts to spread harm reduction services still face major hurdles and funding shortfalls.

The harm reduction movement has made major gains nationally and around the world. But, according to a new report by Harm Reduction International, efforts to spread harm reduction services still face major hurdles and funding shortfalls.

The Global State of Harm Reduction 2018, released December 11, is described as “the most comprehensive independent analysis to date on harm reduction policy and practice around the world.” It indexes the successes and challenges of what grew from “an idea shared by hundreds in the late 1980s and 1990s to an international movement of thousands or more,” writes Filter contributor Maia Szalavitz in a foreword.

The harm reduction movement itself is “thriving,” as Szalavitz puts it. “The power of the idea that drug policy should focus on reducing harm rather than use remains unparalleled: more and more people recognise both the racism and the futility of the war on certain drugs and those who take them.” 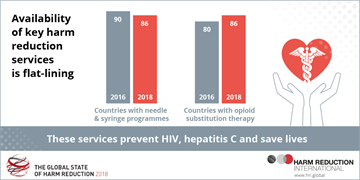 But the report documents some troubling developments, with a plateauing in the international reach of harm reduction services. In 2016, 90 countries provided needle and syringe services. In 2018, that number stands at 86—with Bulgaria, Laos and the Duterte-runPhilippines having cut services. The report found that of the nearly 15.6 million injection drug users in the world, over half live with hepatitis C and nearly one-fifth with HIV.

“The lack of progress in implementing harm reduction measures is a major concern and stunting progress in global health,” said Katie Stone, Harm Reduction International’s public health and social policy lead, in a press release. “It is disgraceful that governments continue to ignore the evidence in favour of demonizing people who use drugs. This is a crisis in need of urgent response.”