Health services in east Ukraine are running out of essential medicines and facing serious shortages of doctors as fighting continues between the army and pro-Russian separatists.

Health services in east Ukraine are running out of essential medicines and facing serious shortages of doctors as fighting continues between the army and pro-Russian separatists. Ed Holt reports.

As supplies of life-saving medicines run out and people struggle to access basic health care in east Ukraine, international health groups say that more than US$20 million is urgently needed to provide health care for an estimated 5 million people affected by the conflict. 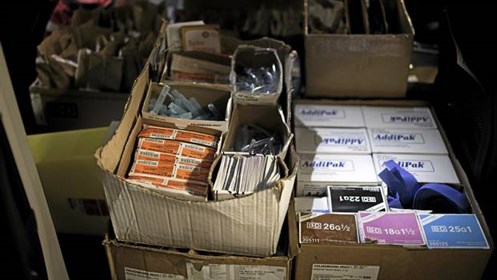 Fighting between Ukrainian Government forces and pro-Russian separatists has led to the almost complete breakdown of essential services, including health care, in many areas. Medical supplies have been severely interrupted or cut off entirely, hospitals have been destroyed or are facing crippling staff shortages as health professionals—up to an estimated 70% in some parts of the region, according to WHO—flee the fighting, and entire areas have been left without water, power, or waste disposal.

Vaccine coverage for some diseases is down to 40% and doctors fear outbreaks of polio and measles. There are concerns about the fate of people with HIV/AIDS and tuberculosis as supplies of vital medicines dry up and patient monitoring becomes almost impossible.

Meanwhile, hundreds of people on opioid substitution therapy (OST) have already had their treatment cut off because supplies of buprenorphine have run out and there is no way to get more into the region. Hundreds more will face the same fate when stocks of methadone run out this month, those running OST schemes say.