Convinced that addiction is a disease, not a crime or moral failing, Chief Campanello, became the law enforcement officer offering heroin users an alternative to prison.

A casually profane man with a philosophical bent, Chief Campanello, 48, first drew national attention last spring when he wrote on Facebook that the old war on drugs was lost and over.

“Any addict who walks into the police station with the remainder of their drug equipment (needles, etc.) or drugs and asks for help will NOT be charged,” he wrote. “Instead we will walk them through the system toward detox and recovery” and send them for treatment “on the spot.”

That post from a small-town police chief was shared more than 30,000 times and viewed by 2.4 million people. By June, his Police Department had put his promise into action in what became known as Gloucester’s Angel program. 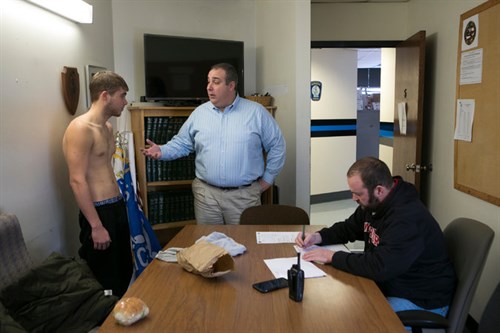 Critics said that he did not have the authority to take the law into his own hands and forgo arrests. But other police departments, fed up with arresting addicts and getting nowhere, saw the Gloucester approach as a promising way to address the epidemic of heroin and prescription pain pills, which together killed 47,055 people in 2014 nationwide — more than died in car accidents, homicides or suicides.

Since the program began, 391 addicts have turned themselves in at the city’s brick police station. About 40 percent are from the Gloucester area; the rest come from all over the country. All have been placed in treatment.

Just as surprisingly, 56 police departments in 17 states have started programs modeled on or inspired by Gloucester’s, with 110 more preparing to do so.