The World Has Failed People Who Use Drugs

A speech delivered by Olga Szubert on behalf of the Harm Reduction International at the ongoing civil society hearing at the UN Headquarters in New York.

The hearing aims to update member states in preparations for the UN General Assembly Special Session on Drugs, to be held in April.

In 1998, the international community gathered here in New York under the slogan ‘A Drug Free World – We Can Do It!’ Since that time, rather than achieving a world without drugs, what we have witnessed instead is the increasing damage caused by punitive drug control in all corners of the world: a catalogue that includes human rights violations against people who use drugs, the spread of HIV and HCV epidemics driven by unsafe injecting, high levels of overdose in many countries, and mass incarceration as a direct result of punitive drug laws. 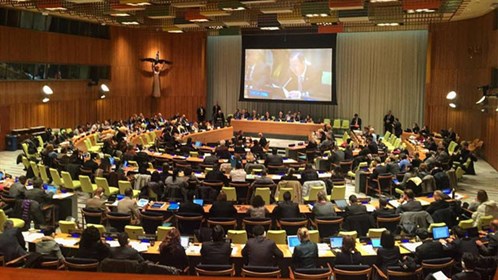 The world needs alternatives to these failed and counterproductive policies. In April 2016, leaders will again meet here at another UNGASS on drugs, an event that offers the opportunity to learn from the policies of the past, and build an alternative response to drug use that is rooted in science, public health, human rights and dignity.

We already know the world is going to miss the UN target of halving HIV among people who inject drugs by 2015. In fact, we're going to miss it by a staggering 80%. The world has failed people who use drugs and we must refocus our efforts. To do this, we need leadership on harm reduction. Harm reduction leadership means increasing political support and funding for harm reduction. An estimated $100 billion is spent each year on drug control, whereas harm reduction investment amounts to only $160million per year - this is only 7% of what is needed. Harm Reduction International estimates that just ten cents of every dollar spent on drug enforcement could fund the global HIV and Hepatitis C response among people who inject drugs twice over. A 10% reinvestment of current drug enforcement spending by 2020, or 10 by 20, is the collective demand of the harm reduction movement.