In April, the world will come together to talk about drugs. The United Nations will host a General Assembly Special Session on Drugs, the most significant high-level international drug policy event in almost two decades.

At the last UNGASS in 1998, the international community met under the slogan "A drug free world - We can do it!" and committed itself to this unrealistic goal. Fortunately, we've come a long way since then. This time, when global leaders meet at the UN to discuss drugs once again, the farce of a drug free world will be far away. Influential voices from around the world are calling for new approaches to drug policy, countries and cities are experimenting with innovative reforms, and a global movement has emerged calling for an end to the failed prohibitionist policies of the past. From April 18 to 21, people from all over the world will be descending upon New York City to demand change. 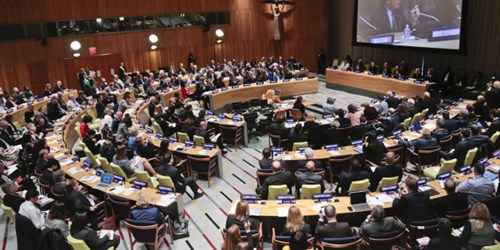 The UN shapes international drug policy. National drug laws must adhere to three UN treaties on drugs that prohibit the production and supply of certain drugs, and criminalize people who use them. The most significant of these treaties, the Single Convention on Narcotic Drugs, was ratified in 1961, over half a century ago. These treaties represent an outdated framework from a bygone time. There is ample evidence of the overwhelming failure of drug prohibition, and the human costs associated with it. This includes mass incarceration for drug offenses in the US, hundreds of thousands killed in drug war violence in Latin America, insufficient access to treatment and harm reduction services around the world, environments and livelihoods destroyed in forced crop eradication, and thousands executed for drug offenses, not to mention the fact that neither drug use nor supply has diminished.

At the 1998 UNGASS, instead of using the opportunity to critically evaluate the global drug control regime, countries decided to perpetuate the failed policies of the past. But things have since shifted. There is growing consensus even within the UN that these policies do not work. And we have a strong movement of individuals and groups affected by the war on drugs that will come to NY in April to appeal to the UN to use the historic opportunity of this UNGASS to charter a different path for international drug policy. These groups will be rallying under Stop the Harm, a diverse, broad, and powerful movement of organizations from around the world who have united around one common purpose: rectifying the catastrophic failures of the current global drug policy regime through campaigning for a new course firmly grounded in health, compassion, and human rights.