World Cancer Day asks us to reflect on how we can play our part, as a collective or as individuals, in reducing the global burden of cancer.

World Cancer Day asks us to reflect on how we can play our part, as a collective or as individuals, in reducing the global burden of cancer. The “global burden of cancer” is actually an aggregate of the very real burden that falls on individual people: on cancer patients, their family members and their caregivers. In the vast majority of cases, people face severe untreated pain, financial worries, often bankruptcy, and psycho-spiritual distress. My part in reducing that burden is to advocate for the mainstreaming of palliative care — which alleviates the “total pain” brought on by cancer and other life limiting illnesses — throughout public health systems. I do this because it is a matter of social justice, and because I witnessed my mother’s severe unrelieved cancer pain and could do nothing to help her at that time.

She died at only 51 from liver cancer, which had metastasised to her bones. It was an agonising death because her doctors had sent her home (to us, in the capital city of a high-income country) to die with no palliative care, inadequate pain management, and a family that had no clue how to look after, or communicate with a dying person, or process our grief. Decades later, I know her pain could have been easily relieved if her doctors and nurses had been properly taught how to manage it. Today, in 2018, in that same country, such a situation would be the exception rather than the rule, unless the patient was poor, homeless, in prison, undocumented, or in a substandard nursing home. 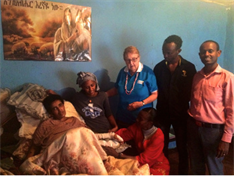 Bridging the global abyss in access to internationally controlled essential medicines for the relief of severe pain, including cancer pain, for instance would cost around USD145 million per year, according to the Lancet Commission, a fraction of the USD100 billion the world spends every year on drug control.