Figures show 28,816 homicides, a 15% increase over the previous year, attributed to drug war and other illegal markets

Mexico’s murder rate broke a new record in 2018 as the country’s drug war dragged on and criminal groups fought for control of an increasingly diversified range of illegal activities.

Figures released this week by the country’s public safety secretariat show that 28,816 homicide case files were opened in 2018, a 15% increase over the previous year. 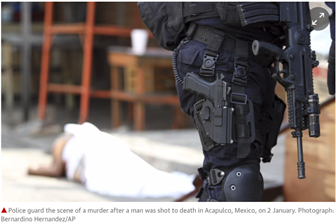 In recent years, violence has exploded in previously peaceful areas of the country such as Quintana Roo state, which registered 763 homicides in 2018 – double the 2017 figure.

Conflict in Quintana Roo – home of the Caribbean resort cities of the “Mexican Riviera” – has been attributed to a struggle for smuggling routes and local drug markets, but in other regions, violence has been driven by other illegal markets.

In the western state of Guanajuato, homicide rates have been sent soaring by an epidemic of fuel theft – in which gasoline is siphoned from pipelines. Guanajuato, the country’s conservative, Catholic heartland recorded 2,609 homicides in 2018, making it the most murderous state in Mexico.

The new murder figures underline the scale of the challenge facing President Andrés Manuel López Obrador, who took office on 1 December promising to calm the country after 12 years of a militarised crackdown on drug cartels and organised crime.