Philippine president Rodrigo Duterte warned on Wednesday his signature anti-narcotics campaign will be even harsher in the future, signalling no let-up in a bloody crackdown that has alarmed the international community.

Philippine president Rodrigo Duterte warned on Wednesday his signature anti-narcotics campaign will be even harsher in the future, signalling no let-up in a bloody crackdown that has alarmed the international community.

Mr Duterte won the presidency by a wide margin in 2016 on promises of eradicating drugs and crime, and recent opinion polls indicate broad support for him and for the crackdown.

The support has maintained despite widespread allegations of police cover-ups and summary killings resulting from weak intelligence.

Duterte said the drugs problem was a national security issue. 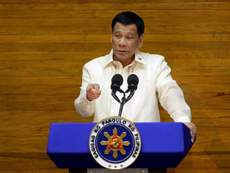 “I will not allow my country to end up a failed state because of drugs,” he said in a speech.

He also claimed the discovery of “floating” cocaine packages washed up on the shores of the Philippines proved international cartels were bringing drugs into the country, according to the Manila Bulletin.

Will the UN revamp its disastrous “Drug Free World” campaign in Brazil? https://t.co/LncqVqO8Hb

Newly introduced California Assembly Bill will sentence people arrested on drug charges to an alternative form of i… https://t.co/aHSmnSnpQ5

One activist is asking the Biden administration to remember the failures that led to the opioid epidemic as it choo… https://t.co/3boiqmHGnJ

Report on people dying of Coronavirus in prison in UK & lessons to be learnt : https://t.co/1s80RsJHMF

RT @russwebt: The impact of coronavirus on the numbers in prison and on probation https://t.co/y98lafLGi4

IDHDP is so fortunate to have Dr Hart as a board member. Finally a professional person with the courage to speak ho… https://t.co/yxGWIAisEq

Imprisonment for up to 15 years for using the word "drug" on the Internet - Drugreporter https://t.co/WVSFieAnT7

RT @Kassandra_Fred: Deborah Peterson Small told @DrugPolicyOrg in our 2014 Black History Month series - "The frame we need to be using for…

IDHDP - THE COST OF A CRISIS https://t.co/Edr7aqpxMD