President Rodrigo Duterte has pushed for the legal age of criminal responsibility in the Philippines to be lowered to just 12, leading to fears children will be increasingly targeted in his violent war on drugs.

Duterte has led the campaign for children to be held culpable as adults for crimes after claiming that drug lords were using children as mules for their illegal trade and that these juveniles were getting away “scot-free”. 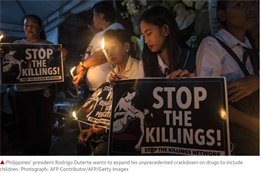 The president had originally wanted the age to be dropped to nine, but agreed to 12 after pushback from politicians and campaigners. The current threshold is 15.

The proposed legislation, which is going through the House of Representatives with the Senate also considering a similar bill, could result in children being arrested and detained in the already overcrowded and dangerous adult detention centres.

This has also led to concerns children could increasingly be caught up in the violent, often fatal, drug raids carried out by police as part of Duterte’s war on drugs, which has killed more than 5,000 people, according to an official toll. Some campaigners estimate the real death toll is between 12,000 and 20,000.

An Amnesty report in 2017 found that police had killed dozens of children in the first 18 months of the war on drugs.