Cracking down on the legal supply is not a solution. In fact, it could spell disaster.

Prescriptions go up. Overdoses skyrocket. People start to freak out. In response, US government officials and physicians clamp down on the medical supply of the drug in question. But that seems to only make things worse: An illegal substance – many times more powerful than those commonly given to patients – hits the streets as the death toll stubbornly continues to climb.

If this sounds like the story of the American opioid crisis, culminating in recent years with the proliferation of super-deadly fentanyl, that’s because it is. But it’s also the story of the Scottish response to an eerily similar problem with the anti-anxiety medications known as benzodiazepines (a.k.a. benzos), which include Xanax (alprazolam), Valium (diazepam) and Ativan (lorazepam), among others. 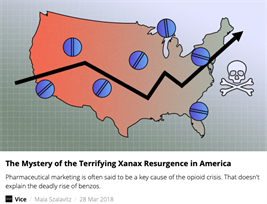 A recent study published in JAMA Network Open found that the number of regular American doctor visits resulting in a benzodiazepine prescription doubled between 2003 and 2015. Meanwhile, the National Institute on Drug Abuse has highlighted that more than 30 percent of opioid overdose deaths involve mixing opioids with benzos, and US overdoses associated with benzodiazepines – the vast majority of which also involve an opioid – grew by a factor of about ten between 1999 and 2017.

These are serious problems in the context of a larger opioid epidemic that has won plenty of attention from politicians across the country. But as glaring stats like these raise the alarm – and they have, with some American patients already reporting that prescribing is being cut significantly – it’s important to look to Scotland for what not to do.

In less than a year between 2017 and 2018, overdose death rates in Glasgow increased by an estimated 43 percent, while Dundee cemented its reputation as the “drug death capital of Europe," driven in part by a flood of strong, cheap, street benzodiazepines.

That surge didn't come out of nowhere.  Read the full original story here
Share this on: