Hungary Is facing an HIV epidemic among drug users

Despite the first HIV transmissions among drug users, the largest Hungarian needle and syringe program has been forced to shut down, because of political attacks

Unlike in Russia or the Ukraine, where HIV epidemics have been largely driven by policies which put pressure on injecting drug users to share injecting equipment, HIV had been virtually non-existent among Hungarian injecting drug users over the past two decades. This situation is now starting to change, and Hungary may follow the example of Greece and Romania, where we have seen major outbreaks of HIV among drug users in recent years. A number of new injection-related HIV transmissions have been registered this year. We have good reason to suppose that a major HIV epidemic is inevitable, if the government doesn't take immediate action to scale up harm reduction programs. Unfortunately there is no political will and leadership to do so. On the contrary: The largest needle and syringe provider has announced that it will soon shut down, because of its desperate financial situation, and political attacks orchestrated by the local mayor. 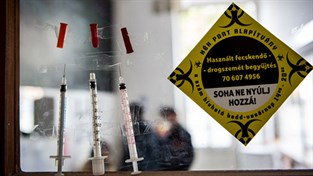 This needle and syringe program has been operated by the “Blue Point” NGO in the 8th district of Budapest since 2006. This neighboorhood has the most concentrated drug user population in the country - the majority of them unemployed, homeless and facing systematic discrimination as members of the Roma community. Injecting drug use is on the rise, with the number of Blue Point’s client contacts increasing by 80 percent during 2011 alone. The program serves almost 3000 clients, and provides almost 40% of all the sterile needles distributed among drug users in Hungary. Prevalence of hepatitis C was already very high (more than 70%) among their clients. HepC, dubbed the “silent killer” by epidemiologists, is not as interesting for the public as HIV (even if it is equally dangerous) so it has been overlooked by decision-makers. A dangerous, potentially explosive combination of changes in the drug market and bad political decisions, has provided fertile ground for an HIV epidemic.