As many overdoses occur in the presence of drug users' family members or peers, however, empowering bystanders to act effectively, before emergency services arrive at the scene, naloxone can save lives.

Naloxone — a pharmaceutical drug used to reverse the effects of opioid overdose — has been used in emergency medicine (e.g. ambulance crews, hospital emergency-room teams) for over 40 years. As many overdoses occur in the presence of drug users' family members or peers, however, empowering bystanders to act effectively, before emergency services arrive at the scene, can save lives. 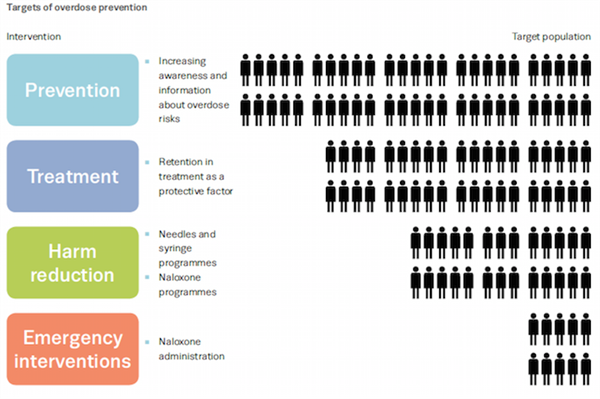 Following pilot initiatives in the 1990s, measures to scale up naloxone availability to those likely to witness an overdose have emerged in the last decade. This has been driven partly by the epidemic of opioid-related deaths (heroin and non-heroin) in the USA.

Analysing 21 studies conducted in four countries — Canada, Germany, UK and the USA — today’s review examines the latest evidence on the role of take-home naloxone (THN) in reducing opioid overdose fatalities. It concludes that THN provision, delivered with educational and training interventions, can be effective in reducing overdose-related deaths and improving knowledge on the signs of overdose and the correct management of patients.

Listed by the World Health Organization (WHO) as an ‘essential medicine’, naloxone is available in injectable form, with non-injecting administration also under investigation. Programmes and trials with THN distribution are currently run in seven European countries: Denmark, Germany, Estonia, Spain, Italy, UK and Norway (Annex 3 of review). Since September 2013, Estonia has offered a naloxone programme to tackle the sharp rise in deaths caused by illicit use of the synthetic opioid fentanyl. In 2014, Norway began a pilot of a nasal spray naloxone programme.