A war on drugs? We'd be better off paying for a war on hunger

Deforestation, limiting access to pain relief, forcing farmers into poverty: we need to wake up to the fact that prohibiting drugs causes more harm than good.

Global drug control policies, much like tax or climate change, impact heavily on many areas of development and inevitably on efforts to meet many of the sustainable development goals that were launched by the UN last year and came into force on 1 January.

Since the mid-20th century, global drug policy has been dominated by strict prohibition and the criminalisation of drug cultivation, production, trade, possession and use, with the intention of creating a drug-free world.

However, far from achieving its goals, drugs trade and use is growing, while the war on drugs undermines efforts to tackle poverty, improve access to health and protect the rights of some of the world’s most marginalised communities and fragile environments. 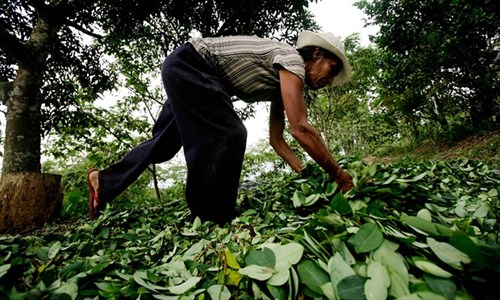 Involvement in drugs is frequently a sign of poverty rather than wealth. Small-scale farmers who grow drug crops such as opium poppy or coca leaf often do so because they lack other opportunities to earn a living and are unable to grow alternative crops – they either don’t own their land, or it is too small or unproductive.

Prohibition has serious consequences for these farmers. Forced crop eradication programmes by aerial or manual spraying with chemicals kill both the drug crops that families and communities rely on, plus any food crops growing alongside, while polluting land and water.

These farmers are pushed further into poverty, and become more dependent on growing drug crops to recover and survive. The SDGs aim to end poverty (SDG1) and hunger (SDG2). Yet it is unrealistic to expect to achieve these goals while the crops poor and marginalised people rely on are repeatedly destroyed as part of targeted policy.