The stunning rise of deaths from the pain drug fentanyl, in one chart

Deaths from the synthetic opioid doubled in just one year.

Fentanyl, an incredibly potent synthetic opioid, is between 50 to 100 times more potent than morphine and has commonly been prescribed to manage severe pain after a surgery or debilitating pain from advanced stages of cancer. But in recent years, illegal manufacturing of fentanyl has skyrocketed, and as a result, has led to a sharp spike in the number of drug overdose deaths from synthetic opioids.

The new data comes from the Centers for Disease Control and Prevention. It shows that two-thirds of drug overdose deaths in the United States are related to opioids — and that understanding which drugs are fueling the opioid epidemic in the US is complicated. 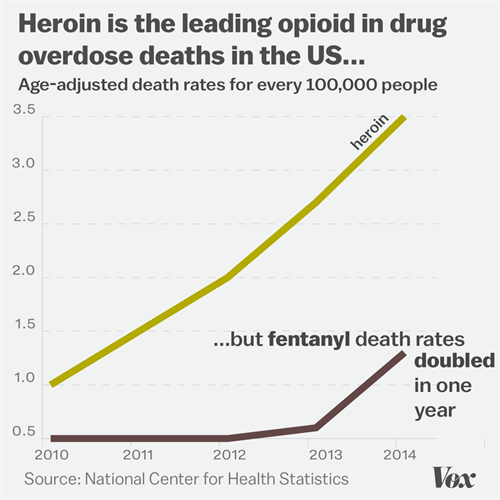 The new data shows that nearly half of drug overdoses in the US aren’t isolated to one drug, but rather, involve an increasingly complicated and lethal drug cocktail. And while heroin, an opioid, is a leading cause of drug overdose death in the US, cocaine, a stimulant and part of an entirely different drug family, is the second-leading cause.

America’s growing problem with drug overdose deaths has long been dominated by opioids. As of 2010, opioid drugs were responsible for a little over 50 percent of all drug deaths, but as you can see in the chart below, that number had grown to 66.4 percent by 2014.