Annual drug statistics for 2020 show fentanyl on the rise across Mexico, with numerous drug cartels fighting for control of the blossoming market.

Trafficking of the deadly opioid fentanyl skyrocketed in 2020 throughout Mexico, solidifying the synthetic drug’s status as a top criminal economy and the country’s role as an international trafficking transit point.

Annual drug statistics for 2020 show fentanyl on the rise across Mexico, with numerous drug cartels fighting for control of the blossoming market.

The Ministry of Defense reports that 1,301 kilograms were seizedthroughout the year — an alarming figure, given that the drug is fifty to hundred times more potent than heroin and morphine. 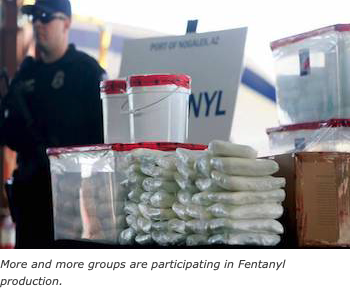 Overall, 2020’s numbers represent an eye-popping 486 percent increase from 2019, when just 222 kilograms were seized, according to the Associated Press. Authorities also destroyed 175 clandestine laboratories, more than double that of the previous year.

Last October, one of the largest operations of the year involved simultaneous seizures across multiple states. In the state of Mexico, one laboratory had the potential to process an “unprecedented” 5,000 kilograms of precursor chemicals, authorities said. Another laboratory found during the operation, in the state of Sonora, was housing fifty drums of precursor chemicals.

“Demand is increasing,” Defense Minister Luis Crescencio Sandoval said in December. “These drugs are much more profitable for criminal organizations.”