Dr. Louisa Marion-Bellemare, left, along with her colleague Dr. Julie Samson, have spearheaded changes to how Timmins, Ont., is dealing with the record number of opioid-related deaths in their community. They include a new treatment strategy, and doctors working with street outreach teams to encourage opioid users to get treatment.

It's a weekday morning and Dr. Louisa Marion-Bellemare, 44, drives her minivan through the snowy streets of Timmins, Ont., to pick-up one of her patients.

With an opiate-overdose crisis gripping her hometown, this is the sort of thing she says you have to do.

"We'll do home visits and see patients and treat them for their substance-use disorder. It's not uncommon for us to do that. We meet patients where they're at."

Marion-Bellemare is in the fight of her life, and along with another doctor, has launched a unique program to address the tragic effects of opioids in Timmins.

Over the past few years, the death rate from opiate overdoses here has been among the highest in the country. In 2019 the rate in Timmins was 46.8 deaths for every 100,000 people – four times the Ontario average and twice as high as Vancouver, which is generally considered ground-zero for the opioid crisis. 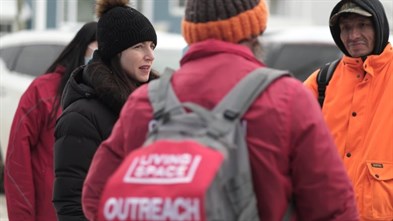 "Our city of 42,000 people having had death rates higher than Vancouver, higher than Toronto, it didn't make sense," Marion-Bellemare said. "That's when I said wow, we have to change something here in our community. This is not right."

A hospital that welcomes people with drug problems

Casper Sutherland, 48, kicks the snow off his shoes and climbs inside Dr. Marion-Bellemare's vehicle. An opiate user for 10 years, Sutherland has been in recovery for six months.

"How's your day," he asks the doctor as they small-talk for a few blocks.

Sutherland is back living with his children and looking for work. It's still early in his recovery, but in a town in the middle of a crisis he is a glimmer of hope.