Bucharest's Drug-Addicted Roma Are Being Left to Rot

"The general public's attitude to the Roma and to the drug addicts is that we are wasting money on nothing, that it's better to let them die than to help them," said Dan Popescu, harm-reduction services coordinator at the Asociatia Romana Anti-SIDA (ARAS). - Max Daly for Vice.

Despite the HIV epidemic among Bucharest's injectors, ARAS is one of only two drug projects carrying out harm-reduction services in the whole of Romania.

It is widely accepted among health officials that official statistics on the extent of drug-related infections in Romania barely scratch the surface, but one analysis found half of injecting drug users have HIV and three quarters have hepatitis C. 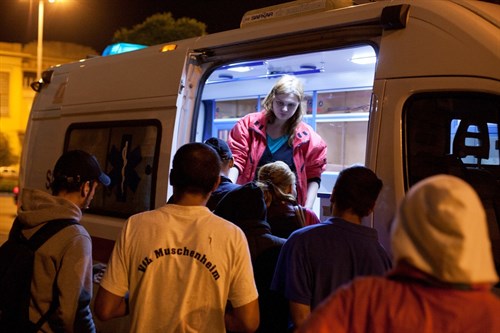 It is no coincidence that the majority of Bucharest's desperately sick drug users are from the Roma community, Europe's largest ethnic minority. Like in many parts of Europe, the Roma, who originated in India and migrated to Europe in the Middle Ages, where they have been an underclass ever since, are a largely segregated community in Romania. On every level—housing, education, employment, and health—they are severely disadvantaged. It is something that, on paper, the EU is struggling to come to grips with. On the ground, however, Roma are subject to widespread discrimination, a nominally illegal situation within an EU member state. Death from drug abuse stalks this population.

Reporting on the situation of Roma people in Europe, the European Union Agency for Fundamental Rights described the levels of exclusion and deprivation in countries like Romania as "shocking." In 2015, in its appraisal of Romania's progress of reform, the European Commission said, "few effective measures were taken to integrate the Roma population" and that there had been little movement in improving education or health care for Roma.

The EU has admitted that despite slow progress, vulnerable citizens like the Roma are best helped if countries remain in the EU. As long as no one kicks up a fuss, the health emergency around Roma drug addiction can be swept under the carpet.