One of the nation’s oldest involuntary commitment laws designed specifically to target people who use drugs is facing a court challenge in Kentucky.

The Matthew Casey Wethington Act for Substance Abuse Intervention—shortened as “Casey’s Law”—was enacted in 2004 and remains one of the primary models for similar statutes in other states. It was adopted in Ohio in 2012, and advocates have pushed for its expansion nationwide. 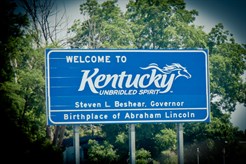 It’s being challenged in Kentucky on the grounds that it violates the First Amendment, as well as a person’s constitutional right to due process and equal protection under the law. The suit was brought by the Kentucky Department of Public Advocacy, the state’s public defender office, on behalf of an unnamed client in late June.

The complaint is currently sealed, making it difficult to ascertain the details of the case. (Filter reached out to the Kentucky Department of Public Advocacy for comment; this article will be updated if they respond.) But the constitutional ramifications of civil commitment for drug use have echoed through many states and cases.

Over the past decade, civil commitment laws have taken off—an unfortunate consequence of the evolving national conception of addiction as a “disease.”

While all states have procedures for committing individuals to psychiatric care if they are perceived to be violent or in imminent danger of hurting themselves, until recently these laws did not typically apply to substance use cases, which were frequently the domain of the criminal courts.

Over the past decade, civil commitment laws have taken off—an unfortunate consequence of the evolving national conception of addiction as a “disease” over which sufferers have no agency. According to a dataset published last year by researchers from Health in Justice Action Lab at the Northeastern University School of Law, by March 2018, 37 states and the District of Columbia had laws on the books detailing procedures for civilly committing people with substance use disorders. Most of the statutes were enacted or expanded between 2015 and 2018, at the height of the overdose crisis.

The Kentucky law’s namesake, Casey Wethington, died in 2002 of a heroin overdose. He was 23 at the time. After his death, his mother, Charlotte Wethington, began strongly advocating for a law to provide an avenue to force people with substance use issues into treatment—even those who are not charged with a crime. In 2004, the law was passed unanimously by the Kentucky Senate and 94-1 by the House, although according to a study of its use in Kentucky, it was rarely invoked prior to 2014.