Even as a UN conference began last week in NY, taking up the subject of ending AIDS, a Kremlin-backed research institute claimed the West is using HIV and AIDS as part of an "information war" against Russia.

​The Russian Institute for Strategic Research (RISR) presented a report to the Moscow City Council last week on HIV in Russia where, unlike almost everywhere else in the world, rates of HIV infection are on the rise.

According to RISR deputy director Tatyana Guzenkova and her colleagues, the real goal of the West's fights against HIV "is the implementation of the economic and political interests of US-led global structures, relying on an extensive network of international and quasi-NGOs." 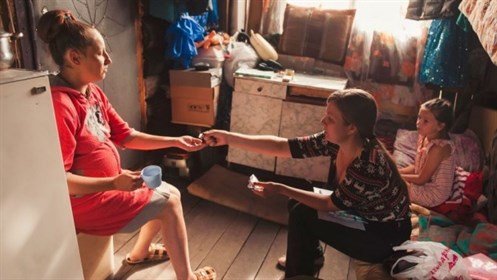 But none of this comes as a shock to Anya Sarang, head of the Andrey Rylkov Foundation.

"We're not surprised at these kinds of statements anymore," she tells me from Moscow, where she works with drug users and sees the scale of Russia's growing HIV epidemic firsthand.

"It's the usual thing in Russia now to discard science for ideology."

There are two models for fighting HIV, according to the RISR report. The Western model, it says, is made of "neoliberal ideological content, insensitivity towards national sensitivities and over-focus of certain at-risk groups such as drug addicts and LGBT people."

The Russian model, on the other hand, "takes into account the cultural, historical, and psychological characteristics of the Russian population, and is based on a conservative ideology and traditional values."