At least 131 people have been publicly killed for alleged drug offences in Bangladesh in the past three weeks, with the country’s leaders lending their support to the approach.

The grisly death toll of Bangladesh’s drug war has been rapidly increasing since May 15, when the country’s law enforcement began publicly shooting people to death for alleged drug offences. While the killing of two peopleon June 3 brings the total number of deaths to 131, activists fear that the true figure may be considerably higher due to the lack of reporting of people killed while in custody.

A human rights advocate speaking to The Quint said that the police, and the elite Rapid Action Battalion (RAB) policing unit, “are killing off 10-12 people every night; it is proving very difficult to keep count. [These are] just people who are facing summary execution. [Likely] more people are dying in detention and we have no way of counting that now”. 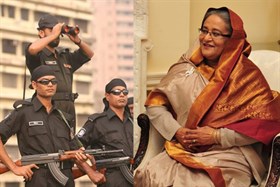 The slaughter has received apparent support from Prime Minister Sheikh Hasina, who led the country between 1996 and 2001, and from 2009 to the present day. Hasina has compared her drug policy plans to the country’s war on terror, which has seen countless people detained or killed for alleged crimes; "there was a social movement against militancy; like that we want another social movement against drugs". She has pledged that the war will continue until all drug "godfathers" have been killed or incarcerated; “you all know very well what I start, I finish — this too I shall see through to the end”.