“There Is No Naloxone for Racism”

Since George Floyd was horrifically murdered by Minneapolis cops on May 25, events have unfolded dramatically, and amid worldwide protests, conversations about police brutality and racism—and responses from defunding to abolition—have become mainstream like never before.

One powerful voice in the outcry will come as no surprise to people familiar with harm reduction and drug policy reform. Kassandra Frederique of the Drug Policy Alliance has been speaking out compellingly on these issues for years. Currently DPA’s managing director of Policy, Advocacy and Campaigns, Frederique will, in September, take over as that preeminent organization’s executive director—a prospect that energizes the whole field. 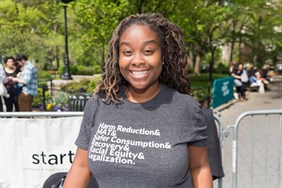 On May 28, Frederique issued a statement in response to Floyd’s death: “With George Floyd most recently, Breonna Taylor earlier this month, and countless others before them, perceived drug possession and drug use served as a justification by law enforcement to dehumanize, strip dignity from, and ultimately kill people of color,” she wrote.

While Frederique had previously said she wanted to hold off on media interviews until taking up her new position, circumstances are exceptional, and she agreed to elaborate on her statement to Filter. Our interview has been lightly edited for length and clarity.

"I think it’s important for folks to realize that it is not an innate thing that Black people get killed by law enforcement. Some people might struggle with that because of the history of people of color and law enforcement and slavery and child slavery and different institutions that have criminalized and killed and maimed people, but the fact that people of color—Black people and Indigenous folks—are getting killed is based on a set of decisions and policies. It’s a culture that we have built.

So it’s important, when people are killed by law enforcement, that we point to the reasons that create the circumstances of the issue at hand. There are countless decisions that were made that led to the killing of George Floyd. There were countless decisions made that led to the situation of Breonna Taylor being killed in her bed. If we are not situating these killings in that way, then one can feel completely overwhelmed, and have no sense of direction about how to get to the answer."