Biden Could Have Taken the War on Drugs Down a Notch. He Didn’t.

A little-noticed law could make it easier to punish people for low-level drug crimes — and put them in prison for longer with less proof.

Last month, President Biden quietly extended a policy that critics call a betrayal of his campaign promise to end mandatory minimum sentences. The new law concerns “class-wide scheduling of fentanyl analogues.” It may sound like a wonky snooze-fest, but the measure could land more low-level drug dealers in prison for longer and with less proof than is usually required — while kingpins and chemists who manufacture and distribute these new drugs don’t tend to get caught. 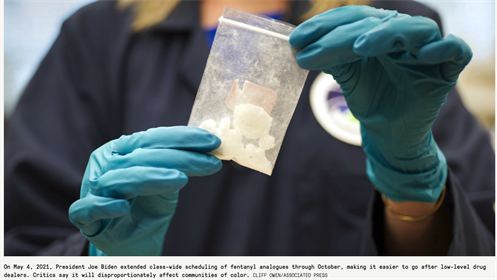 An analogue is like a chemical cousin to fentanyl — similar in molecular structure, but not exactly the same. Because illegal fentanyl is made in labs (usually black market labs in China), there are almost infinite ways to tinker with its molecules, creating new drugs and staying one step ahead of the feds. As one becomes illegal, cartel chemists invent another. Class-wide scheduling makes a broad swath of analogues preemptively illegal, including substances that haven’t been invented yet — even those that could turn out to be medically useful. A handful of researchers are studying fentanyl analogues for possible new treatments for addiction to opioids — including some promising avenues for a fentanyl vaccine — but say the new law stymies research.

For years, prosecutors have had a few legal, but cumbersome, avenues to go after fentanyl copycats. To make analogues easier to prosecute, in 2018 the Drug Enforcement Administration issued a temporary order enacting class-wide scheduling. Congress has since temporarily extended the order twice, most recently on May 4. Supporters of this approach say it cuts off this game of “whack-a-mole” and removes incentives for illegal drug labs to keep inventing new analogues. Opponents of drug criminalization say it will only lead to more low-level dealers going to prison for an excessively long time and will fall disproportionately on the Black community, as evidenced by data on lopsided fentanyl analogue prosecutions so far. And in a haunting echo of the crack/cocaine disparity of the 1980s, fentanyl analogues are punished more harshly than fentanyl itself, without the science to back it. The new measure is another temporary extension, good for about six months while the administration studies the issue — so you can count on it coming up again soon.

Here’s what you need to know about the War on Drugs, fentanyl analogues edition.

What does “scheduling” mean?

Schedule I drugs, like heroin (and, incidentally, marijuana, but that’s a story for another day), are said to have high abuse potential and no accepted medical value. Placing drugs in Schedule I allows the government to prosecute people and send them to prison for possessing, making or selling them. (Schedule II drugs also have high abuse potential, but may have worthwhile medical uses — so they’re legal, but tightly regulated. Fentanyl itself is Schedule II, because doctors sometimes prescribe it for pain management.)

Scheduling is typically a long and convoluted process involving multiple government agencies. More than two dozen fentanyl analogues have already been scheduled this way, but this approach is too reactive, said Tim Westlake, an emergency physician in Wisconsin who testified in support of the new law in the House. “There’s a window between the time they’re aware something is dangerous and the time they can get it emergently scheduled. You'd have to wait until a bunch of people died.”