As opium cultivation has soared in Afghanistan over the course of the war, heroin addiction levels have followed.

This is where Kabul’s surging numbers of heroin addicts gather to smoke, inject and occasionally die — usually with an intently staring audience. Some look on in judgment, others with pity. 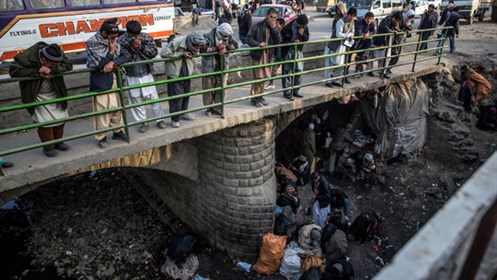 As opium cultivation has soared in Afghanistan over the course of the war, addiction levels have followed. Kabul residents have increasingly watched the problem play out in public, a spectacle in a city with few others.

Government officials do have a plan. It involves moving addicts from encampments around Kabul to a large facility where they will be weaned off opiates. The treatment center will be on the grounds at Camp Phoenix, a former United States Army base handed over to the Afghan government. Camp Phoenix was once one of the largest Army bases in Afghanistan, suggesting that some foresight went into its selection as a future home for the addicts.

Accurate figures regarding the number of heroin and opium users across Afghanistan are hard to come by. In recent years, United Nations officials have estimated that about 2.7 percent of adults in Afghanistan are opiate users, one of the highest rates in the world, similar to that of Russia and Iran. Over all, officials with the United Nations estimate, there are 1.3 million to 1.6 million drug users in the country, about 5 percent of Afghans.