In this new consolidated guidelines document on HIV prevention, diagnosis, treatment and care for key populations, the World Health Organization (WHO) brings togetherall existing guidance relevant to five key populations – men who have sex with men, people who inject drugs, people in prisons and other closed settings, sex workers and transgender people – and updates selected guidance and recommendations. These guidelines aim to: provide a comprehensive package of evidence-based HIV-related recommendations for all key populations; increase awareness of the needs of and issues important to key populations; improve access, coverage and uptake of effective and acceptable services; and catalyze greater national and global commitment to adequate funding and services. 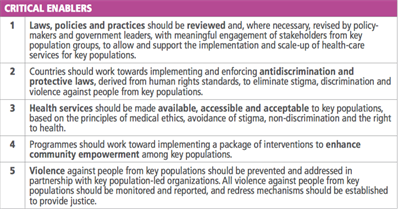 those from community-based and community-led programmes, in planning for and implementing services for these populations. Thus, this consolidated guidance addresses the issues and elements for effective HIV service delivery that are common to all key populations as well as those specific to one or more groups.