The Civil Society Task Force (CSTF) for the 2016 UNGASS was launched in Vienna on Wednesday 3rd December by the Vienna and New York NGO Committees.

Civil society is preparing for the United Nations General Assembly Special Session (UNGASS) on the world drug problem in 2016. On 3 December 2014, before an audience of Member States representatives, UN experts, fellow NGOs and students, the Civil Society Task Force - CSTF was launched. 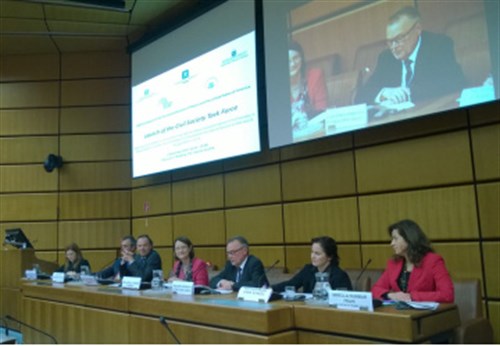 The launch was co-sponsored by the Permanent Missions of Italy, Mexico, Norway, Sweden and the United States of America. The event was chaired by H.E. Ambassador Bente Angell-Hansen, Permanent Representative of the Kingdom of Norway to the International Organizations in Vienna, who welcomed the creation of the CSTF.

Building on the success of Beyond 2008, the CSTF is a joint initiative of the Vienna NGO Committee on Drugs - VNGOC and the New York Committee on Drugs - NYNGOC. The CSTF will act as official liaison between the United Nations and civil society in the preparatory process of and at the UNGASS 2016. The newly created body will seek to ensure a comprehensive, structured, meaningful and balanced participation of civil society during this process.

Mr. Esbjörn Hörnberg, Chairperson, VNGOC and Ms. Elisa Rubini, Vice-Chairperson, VNGOC elaborated on the added value of the CSTF, its structure and roadmap of activities until UNGASS 2016. Ms. Heather Haase, Chairperson, NYNGOC and Mr. Allan Clear, Treasurer, NYNGOC, drew attention to the role NGOs would play in the UNGASS 2016 preparatory process, as well as the framework for civil society engagement in this process.

Read more information about this issue.