Just over two decades ago, South Africa underwent a massive political shift. The new constitution was created and praised as one of the most progressive in the world. One area in which South Africa continues to lag behind, however, is drug policy.

In South Africa, drug use is criminalized and often incorrectly blamed for an array of social ills, a simplistic conventional wisdom that doesn’t give due consideration to the multiple and complex drivers of poverty, crime, and drug use itself. At the 58th Commission on Narcotic Drugs, for instance, South African officials inaccurately described drug dependence as one of the “root causes of crime.” This misunderstanding of drug use has led to high levels of stigmatization and exclusion. When it comes to the “drug problem,” apartheid-style policing is seen as justified and remains the norm. 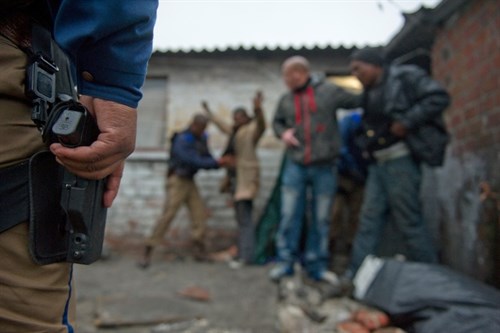 In South Africa, the war on drugs is waged daily in communities that have been oppressed for decades. These communities are now so criminalized they are essentially police states. The costs of this—social exclusion, mass incarceration, strain on the justice system—have been ignored. Instead, officials focus solely on the politically expedient target of eradication. Even with this focus on drugs, however, evidence-based treatment options are lacking and barriers to entry are high. The increase in injecting drug use is also a concern, especially considering the notable lack of harm reduction services and state-funded opioid substitution therapies in a country already suffering an HIV epidemic.

Across the globe, societies are abandoning their old-school methods of dealing with drugs. Treating drug users as criminals is increasingly recognized as a failed approach. The upcoming UN General Assembly Special Session on drugs (UNGASS) has provided further momentum for countries and regions to consider health- and human rights-based drug policies instead. Yet in South Africa, debate around the UNGASS process has been almost non-existent at both the government and the civil society levels.