Violence against women is overlooked in its role in opioid epidemic

Many women in controlling and violent relationships “self-medicate” – or use drugs that are not prescribed to them to help with their medical condition – to mitigate the trauma of physical and sexual assault.

One night, a woman I’ll call Tonya got a compliment from a guy when she was out with her boyfriend. Tonya’s boyfriend cursed her because another man had complimented her. He said: “You give it to everybody, I want it too.” In anticipation of his physical abuse, she reasoned, “I could go off to Wonder World.” She then injected heroin, to be “in her own world,” she later told me.

Tonya is only one of the hundreds of women I’ve interviewed for my research with similar stories in the span of my nearly 30-year career studying the links between intimate partner violence, sexual coercion, substance use disorders and HIV. 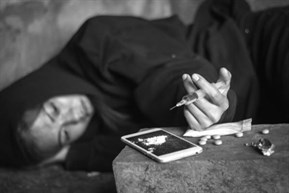 In the early 90s, I was among a few social scientists who identified intimate partner violence as a major risk factor for HIV risk behaviors and transmission and a barrier to treatment access, and engagement among women.

Over the years, I have designed, tested and promoted the use of gender-specific HIV and prevention interventions to address these issues simultaneously for women, men and couples who use drugs.

More recently, I have expanded my substance abuse research to include greater involvement in opioid overdose prevention among women and men. I have begun a cross-university collaboration to tackle the opioid crisis and issues such as partner violence, reproductive health and gender equity are included in the interventions that we will develop, in order improve access to services and treatment for individuals who use opiates.

While progress has been made to address intimate partner violence among women who use drugs, those with opioid use disorders who experience partner violence are still in dire need of help in navigating and engaging in substance use treatment programs and other services.

Our research found that many men with substance use disorders often undermined their female partners’ recovery. They can control their ability to engage in treatment, deny them potential sources of protection, and jeopardize the custody of their children to maintain control over them and, for some men, have women take care of them.