Pedicures, manicures and blow-drys bring women through the door to help them access rehabilitation

Naima Said stands back and studies her handiwork. “Not quite,” the self-taught beauty therapist mumbles, her forehead furrowed in frustration. Then she delicately dabs her client’s eyelid with a squishy makeup sponge. She’s not finished yet. 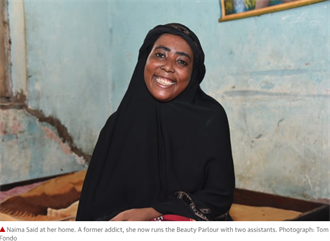 Several years ago Said, 31, used YouTube videos to train herself in everything from dying hair to pedicures. Now she runs the Beauty Corner – a small but perfectly formed parlour in Mombasa on the Kenyan coast. Every weekday at 8am, she lays out her equipment and waits for women to walk through the door. Like Said, those who seek out her services are addicted to heroin, or in recovery.

Housed in the Reachout Centre Trust, a Kenyan organisation that helps Mombasa residents to fight drug addiction, the parlour opened last year with the aim of attracting more female users to its services, which include HIV testing, counselling, methadone treatment and cervical cancer screening.

Said was a heroin user for 10 years. After her father ran out of money to pay for private school, she was at a loose end, she says. Aged 17, she started smoking marijuana with her friends. By 21, she was a “full blown” heroin addict.

In 2017, the UNODC said heroin addiction appeared to be on the rise in Kenya, particularly along the coast. As east Africa’s largest port, Mombasa has borne the brunt of this increase, but usage has spread to other areas, including Nairobi and Kiambu county. Data is patchy, but it is estimated that between 18,000 and 55,000 Kenyans use heroin.

While help is available at more than 50 registered treatment and rehabilitation centres across the country, rehabilitation is rarely free. Women are falling through the cracks.

A key problem is stigma: many participate in sex work to fund their drug habit (a single heroin dose costs between 150-200 Kenyan shillings, roughly £1.50) and this prevents them from accessing treatment. Concerns about childcare, hard-to-reach treatment centres and relationship issues – the women often live with a partner with their own substance problem – also stop many coming forward for help.

If women do seek out treatment, they are likely to drop out faster, and experience higher risks of HIV infection. Women constitute the minority of users, but experts say that the numbers on female drug use are underreported and likely to be much higher.

At the same time, there is a clear lack of services tailored to women’s needs and the majority of rehabilitation centres are aimed at men. While research on female drug addicts in Kenya is limited, studies have indicated that women enrolled in gender-specific treatment programmes have better outcomes and improvement than those who are not, according to the UNODC.