Crystal meth use rises during lockdown in Zimbabwe

Inside a tiny room in Kuwadzana, a township in Harare, Solomon Sigauke (name has been changed) and his friends talk animatedly about football and listen to loud music. The misty vapour from the crystal meth fills the room as they take turns on a fluorescent pipe. Sigauke, 25, has no cigarette lighter so he is improvises, holding a burning candle while his friend Kudzo puffs the smoke from the burning substance, known locally as mutoriro. 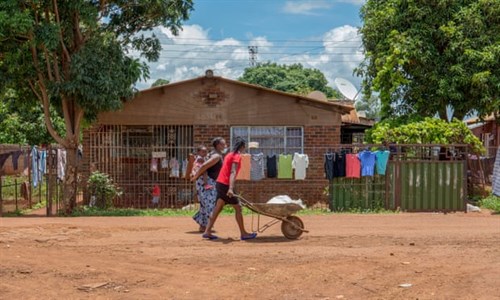 A street in Kuwadzana. Crystal meth used to be only found in more affluent suburbs but has spread to the townships. Photograph: Cynthia Matonhodze/Guardian

It is 7pm in Kuwadzana, about nine miles from Harare’s central business district, where many youths have ventured into illicit and dangerous drugs such as mutoriro, with the numbers rising as the lockdown cut them off from jobs and their usual social lives. Known scientifically as methamphetamine, crystal meth is a highly addictive stimulant used for its powerful euphoric effects.

Sigauke demonstrates the process of decrystallising the white chemical into a brown smoking smear. The curved pipe is made from fluorescent tubesfrom disused energy-saver lightbulbs that are cleaned and sold to drug users for $1. As he exhales a cloud of the toxic smoke, his friends burst out laughing at Sigauke’s drooling face. “You should be careful not to ingest the smoke because it causes stomach-ache,” Sigauke explains.

Although the drug has been used in Zimbabwe for some years, its use has grown in the townships as the economic crisis grips the country, leaving few job prospects for its young people. Zimbabwe has nearly 90% unemployment, with young people worst affected.