How America overdosed on drug courts

Drug courts celebrated their 25th anniversary last year. Designed for defendants who have committed non-violent felonies such as drug dealing or burglary while addicted, they have been touted as a perfect balance of treatment and punishment, and as a way for the most corrigible offenders to avoid the harsh sentences mandated by drug-war laws.

If defendants complete a program of drug testing and mandatory treatment—often including short jail terms, known as flash incarcerations, in the case of serious rule violations—they can avoid lengthy mandatory prison terms. Those who fail to “graduate” from the program, in the self- improvement-geared parlance of drug courts, face the mandated sentence, or sometimes an even harsher one. Coercion, the theory goes, is the key to rehabilitation. 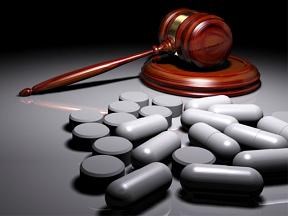 More than 2,800 drug courts now exist in the United States, serving approximately 120,000 defendants annually. But many drug court judges vociferously oppose the practice of opioid maintenance and require patients to become completely abstinent as a condition of participation or graduation. They believe that maintenance simply amounts to swapping one drug addiction for another.

According to a 2012 study, only about a third of all drug courts permit participants to start maintenance as the treatment component of their program, and many oppose it.

Although the National Association of Drug Court Professionals says that a judge’s decisions must be based on “treatment and medical evidence,” it nevertheless strongly believes that judges should retain the discretion both to use flash incarceration and to decide on a case-by-case basis what treatments are acceptable.

If doctors were to deviate this far from the standard of care in treating patients, they would face malpractice judgments and, in extreme cases, criminal prosecution. But drug court judges face no such accountability, even though they generally acknowledge that addiction is a disease and make final decisions on which treatments are permitted. Unfortunately, this judicial independence, otherwise so crucial to the balance of democratic power, means that drug court judges—who are not required to have special training—can disregard the medical consensus. They are granted great leeway in making life-and-death decisions about treatment. In effect, they are allowed to practice medicine without a license.