From Afghan Fields to an English Needle: Tracing Heroin's Journey Across the World

In densely-populated Brent, one of the poorest boroughs in London, it's not difficult to find heroin. It might have fallen out of favour with the younger generation of drug users, for whom the 1990s was enough warning of the drug's many downsides, but a large number of addicts who started using in the 1970s and 1980s are still around.

Mike*, a tall and well-presented man in his mid-fifties, has been injecting heroin for more than 25 years. The first time was with his former girlfriend Larissa, who was a drug dealer.

"One day she was sent heroin instead of the cocaine she was expecting," Mike explains. "We didn't know what to do with it, so we began using it ourselves. Though it made me feel sick, I continued taking it. Shortly after that first time, I got locked up in prison, where my cellmate happened to be a long-term heroin user. I picked up his habit of using crack cocaine and taking the heroin to bring the high down. 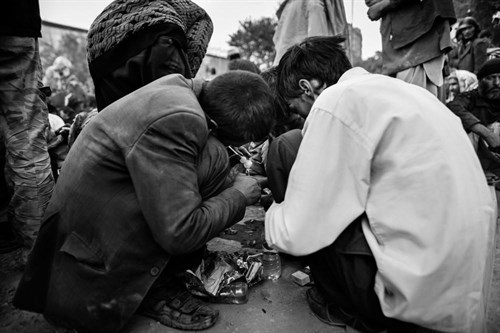 "The first time I overdosed, my drug-taking friends looked up to me like I was now one of them. After every overdose I swore I would change, but as soon as I was discharged from hospital, I went straight back to heroin."

Although Mike seems calm enough about his drug use, there's a palpable sense of regret in his voice. "I messed up all my relationships because of the drugs – from family ties to the number of very destructive relationships I had with women, many of them addicts themselves, with whom I have various children," he says.

Three weeks ago, Mike, who is now a full-time carer for his 87-year-old mother, decided enough was enough and managed to wean himself off heroin – for now, at least – with the help of a methadone programme.