Widespread heroin use in an African country may seem unusual but what is even more surprising is the fact that two hospitals in Dar es Salaam now make methadone available as treatment for addiction.

In a discreet corner of the Mwananyamala District Hospital grounds, in Dar es Salaam, a group of young people queue up outside a small window to get their daily fix of methadone. Others are taking refuge from the intense heat in the few shady spots available in the dusty yard behind the low building housing the methadone clinic. There are few women to be seen but that, as explained by Dr Pilly Sahid Mutoka, the Assistant Medical Officer at the clinic, is because women drug users suffer greater stigma than men and are less comfortable about declaring their drug problem.

n recent years, Dar es Salaam has seen an increase in illicit drug use, particularly heroin, as the large port city has become a pit stop for smugglers en route from Afghanistan to Europe and the rest of Africa. The heroin sold is not great quality but it is cheaply available, with one dose costing as little as one US dollar.

Widespread heroin use in an African country may seem unusual but what is even more surprising is the fact that two hospitals in Dar es Salaam now make methadone available as treatment for addiction. Methadone maintenance treatment – which has been around for over 40 years – is regarded by WHO as the most effective therapy for heroin users. But due to stigma many countries, including a number of wealthier ones, have not yet accepted the use of methadone to curb heroin addition and, globally, fewer than 10% of heroin users needing treatment can access it.

“We are among the first and the most successful methadone programmes on the continent,” Dr Pilly says proudly. “We have had other countries, like Kenya, Mozambique and Zambia come over to learn from our experience.” 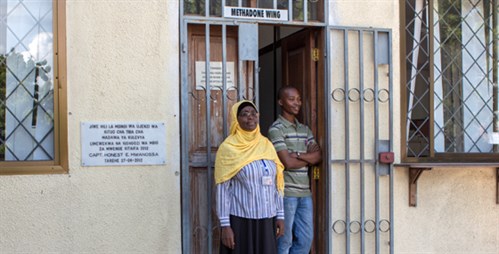 Yusuf Ahmed Mzitto, better known as Kessy, says methadone has turned his life around, after three years of addiction and several attempts at giving up heroin. Timid and innocent looking for his 33 years, Kessy began to use drugs in 2013 to cope with the stress of a demanding IT job. He also harks back to his mother’s death in 2 000. “I’m the third of four children,” he explains. “When my mother died I had to provide for the entire family. Can you imagine what that was like?”

Dr Pilly explains that many of the drug users she sees at her clinic had undergone some kind of trauma prior to using drugs. “And drug use multiplies their problems,” she adds. “Because of needle sharing and harmful behaviours, HIV, TB and STIs (sexually transmitted diseases) are extremely high among injectors.”

Tanzania’s methadone programme was first piloted at Muhimbili National Hospital, the country’s largest health facility, with funding from the US, in an effort to curb HIV transmission in the country. A year later it was extended to Mwananyamala District Hospital to service people in Kinondoni, a district with a lot of drug users. Now it is seen as a programme whose usefulness goes beyond AIDS prevention and can truly rehabilitate young people whose lives have fallen prey to the city’s cheap drug market.