The drugs trade is often portrayed as populated by wealthy individuals. The reality is poor communities targeted for repression, criminalisation and even the death penalty.

Amidst media furore over illicit drug use, Tory leadership favourite Boris Johnson dodged questions today over past drug use, whilst the wheels of Michael Gove’s campaign for the premiership are careering to a halt. Eight of the eleven candidates have admitted to some form of drug consumption, from Hunt’s cannabis infused lassi, to Rory Stewart’s opium smoking in Iran.

Quite rightly, Gove has been taken to task for advocating policies which saw teachers banned from their profession for taking class A drugs while he was education secretary and for upholding a justice system which incarcerates people for up to seven years for the very behaviour he previously engaged in. Despite the political elite’s refusal to deviate from the party line that prohibition is essential to create a ‘drug free world’, the evidence from around the world is clear - more people now produce, sell and consume illicit drugs than ever before.

Undoubtedly, the scandal has shone light on the hypocrisy of the so called ‘war on drugs’ in the United Kingdom, particularly, the highly racialised and class based dimensions of its application. It is clear this is not a war on illicit substances, but on racialised and working class people.

Yet the scope of drug policy discourse rarely turns to the people whose livelihoods depend on the production of plants which go on to be consumed by the political elite as illicit drugs. Indeed only Rory Stewart made passing reference to this when he referred to the communities he smoked with in Iran, saying “the family may have been so poor that they put very little opium into the pipe.”

Despite the dominant narrative of the drugs trade painting a picture of assumed wealth, violence and organised crime, the majority of people involved tend to be poor and otherwise marginalised due to their race, gender, indigenous status and/or lack of formal land rights. The global commitment to prohibit drugs at all costs means that rural and indigenous communities involved in the cultivation of prohibited plants such as cannabis, coca leaf and opium poppy are routinely targets for repression and suffer from discrimination, stigmatisation, criminalisation, imprisonment, and the destruction of their livelihoods. 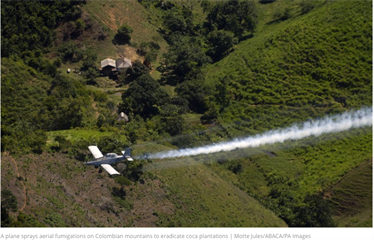 While political actors from the UN and state governments argue that prohibition can coexist with a human rights approach, the evidence remains that focusing on eradication and punitive responses creates and reinforces cycles of impoverishment that can be hard to get out of. For instance, when producers’ crops are eradicated, farmers can lose all of their (small) income, making it harder for them to access healthcare or buy food. This can create a vicious cycle where illicit crop producers become increasingly dependent on cultivating prohibited plants to counter the poverty forced on them by eradication. Both at home and abroad, people who receive criminal convictions for supplying or possessing drugs can often find it harder to access jobs, which makes it harder for them to stop engaging in the drug trade and consigns them to a lifetime of poverty.