In Cities Where It Once Reigned, Heroin Is Disappearing

The rise of the more potent fentanyl in its place has put a generation of older users, who had managed their addiction, at far greater risk of overdose.

BALTIMORE — Heroin has ravaged this city since the early 1960s, fueling desperation and crime that remain endemic in many neighborhoods. But lately, despite heroin’s long, deep history here, users say it has become nearly impossible to find.

Heroin’s presence is fading up and down the Eastern Seaboard, from New England mill towns to rural Appalachia, and in parts of the Midwest that were overwhelmed by it a few years back. It remains prevalent in many Western states, but even New York City, the nation’s biggest distribution hub for the drug, has seen less of it this year.

The diminishing supply should be a victory for public health and law enforcement alike. Instead, in cities like Baltimore, longtime users who managed to survive decades injecting heroin are now at far higher risk of dying from an overdose. That is because synthetic fentanyl, a deadlier drug that is much cheaper to produce and distribute than heroin, has all but replaced it. 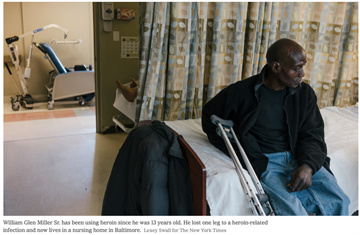 The dramatic rise of fentanyl, which can be 50 times stronger than heroin, has been well documented. But its effect on many older, urban users of heroin, who had been able to manage their addiction for years, has been less noticed. The shift from heroin to fentanyl in cities has contributed to surging overdose deaths among older people and African-Americans and deeply unnerved many like William Glen Miller Sr., who first tried heroin as a 13-year-old in West Baltimore.