Escaping the grip of opioid addiction doesn't come easily for anyone. But a new study reveals sharp racial and financial divides in which Americans receive effective treatments for opioid addiction.

Those differences have only grown larger as the national opioidcrisis has intensified, the research shows.

For every appointment where a person of color received a prescription for the addiction-treatment medication called buprenorphine, white patients had thirty-five such appointments. That's according to data from 2012 to 2015 analyzed by researchers from the University of Michigan and VA Ann Arbor Healthcare System. 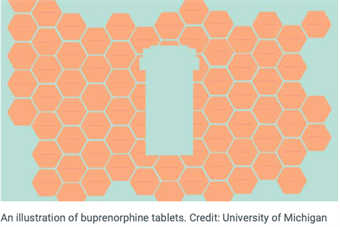 That's despite previous national research showing that opioid use disorder occurs at about the same rate in black and white populations.

Even as the number of buprenorphine prescriptions written at outpatient clinic visits grew rapidly over the previous decade, the study finds that the percentage of those visits where the patients were black fell over time.